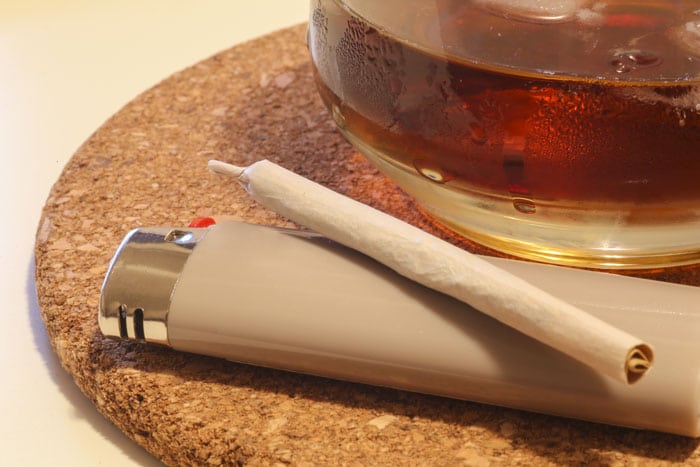 According to data from the AAA Foundation for Traffic Safety, drivers who use both marijuana and alcohol are more likely to engage in potentially dangerous driving behaviors, such as distracted or aggressive driving, speeding and intentionally running red lights, than drivers who only use one, or don’t use either of those substances.

As AAA director of traffic safety advocacy and research, Jake Nelson puts it: “These data show the alarming impact of alcohol and marijuana use on the choices drivers make when they get behind the wheel. From choosing to drive while impaired, and speeding, to driving distracted or running red lights, using these two drugs leads to poor decision-making with potentially fatal consequences.”

Each year the AAA Foundation releases it’s Traffic Safety Culture Index, which assesses the nation’s feelings and behaviors regarding various aspects of traffic safety, such as drinking and driving, seatbelt use, cell phone use while driving, and more, in order to track how public opinion and behavior has changed over the years.

In order to gather the data, they conduct a nationally representative phone survey that both gages how people feel about certain topics, and learns how they behave themselves when they’re behind the wheel.

The survey responses of drivers who admitted to using alcohol and cannabis, in some situations at the same time, over the last 30 days, were compared to drivers who only consume alcohol but abstain from marijuana, and drivers that reported using neither.

The researchers discovered that the drivers who admitted to using both alcohol and marijuana, were more likely to engage in certain driving behaviors than drivers who only drink alcohol. These behaviors included:

Drivers who said they don’t consume either substance were substantially less likely to engage in those behaviors than either of the other two groups.

Considering the fact that alcohol and marijuana are the most used intoxicants in the United States, and the fact that many more states are starting to legalize recreational marijuana, it’s important to educate the public as much as possible about the dangers they may be putting themselves, and others in when they get behind the wheel while intoxicated.

Several studies have concluded that ingesting marijuana impairs a person’s ability to handle a motor vehicle safely, because use of the substance can slow down a driver’s reaction time, inhibit their ability to concentrate on the road, and can make people act impulsively. Some studies even suggest that driving while high can double the likelihood of someone getting into a collision.

So whether you choose to imbibe or not, it’s important to realize that the taking risks when behind the wheel, not only puts your own life at risk, but the lives of those around you as well. Drive safe, drive sober.

Have you or a loved one been injured by the negligent actions of a driver? Are you concerned you won’t have the money to pay medical bills and lost expenses? If so, you need an experienced Colorado Springs car accident attorney on your side to help you fight for justice.