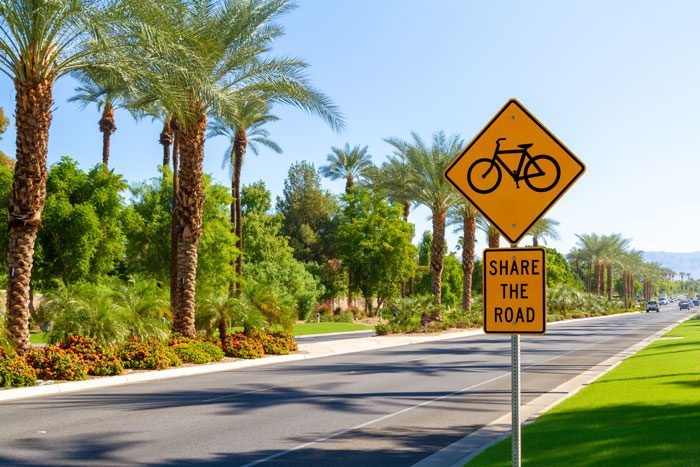 The temperature is starting to creep up, which means we can all expect to see more people commuting by bicycle. So now is as good a time as any to remind us all about the importance of sharing the road.

Bicyclists Have the Same Rights as Drivers, and a Few Others

First, it’s important to understand that according to Colorado law, every person riding a bicycle shall have all of the rights and duties applicable to the driver of any other vehicle. But in addition bicycles, because they have some safety challenges that are unique from motor vehicles, may also have some additional rules governing them, depending on the location, that are intended to help protect their safety and make their commutes easier.

For instance, in 2018 the Colorado House passed a “safety stop” bill which standardizes the legal language around enacting safety stop laws in cities and towns around the state. The hope being that this will enable more communities to create bike friendly laws, such as enabling them to not come to a complete stop at a stop sign, like motor vehicles have to do.

Also, cyclists can travel two to a lane as long as they’re not impeding traffic, something obviously not available to cars and trucks.

Bicyclists are More at Risk of Injury

Everyone can understand how, due to the inherent nature of their design, bicycles leave their riders with much less protection than other motor vehicles. Less outward protection means that bicyclists that are involved in accidents, especially crashes with cars or trucks, typically suffer from more serious injuries.

According to the Insurance Institute for Highway Safety, in 2019 alone, there were 843 cyclist fatalities due to collisions with motor vehicles. These typically represent on average about 2% of all traffic fatalities annually.

While child bicyclist fatalities have thankfully declined greatly over the last few decades, there is a potentially disturbing new trend. Since 1975, fatalities of bicyclists aged 20 and over have tripled. This makes sense, as the adoption of bicycling as a form of commuting has increased and become more mainstream. More cyclists on the road necessarily means that there are going to be more accidents.

The better the rest of us are at sharing the road with bicyclists, the more we’ll be able to bring down these numbers, and save more lives.

Bicyclists Have Responsibilities Too

But while it’s important that the drivers of cars and trucks look out for their fellow neighbors on bicycles in their communities, cyclists themselves also have to make sure they’re looking out for their own safety.

There may be laws that offer protections to cyclists that don’t work for motor vehicles, but there are also laws that are meant to discourage certain types of behaviors that actually put cyclists at risk.

For example, it is prohibited for cyclists to have more than one person on a bike, unless it’s a bicycle that is equipped for multiple people, such as a tandem bicycle. Also, cyclists are prohibited from attaching themselves or their cycle to any motor vehicle on the roadway.

Also, with the exception of passing another vehicle headed in the same direction, avoiding a hazard, or making a turn, cyclists are required to travel in the right hand land, and as far to the right as possible.

While Colorado law does not mandate that cyclists wear helmets while riding, it is widely believed by experts to be one of the best possible ways to protect cyclists. One study found that bicycle helmets provide a 63-88% reduction in the risk of head and brain injury for cyclists of all ages.

If everyone does their part to watch out for their fellow community members who are trying to get around, however they choose to do it, and if we all take the necessary precautions to ensure our own safety as much as possible, we can hopefully turn these numbers around, and make our streets safer for everyone.

Further Reading: Are Fatal Wrong-Way Driving Crashes on the Rise?

Have you or a loved one been injured by the negligent actions of another person while riding a bicycle? Are you concerned you won’t have the money to pay medical bills and lost expenses? If so, you need an experienced Colorado Springs bicycle accident attorney on your side to help you fight for justice.